Skip to content
You are here
Singapore GP 2008 for GTR2

Conversion of the best Singapore version by Slimjim for rFactor.
Thx him for authorization to convert it.

The Marina Bay Street Circuit (otherwise known as the Singapore Street Circuit) is a street circuit around Marina Bay, Singapore, encompassing the planning areas of Downtown Core (Turns 4 to 23) and Kallang (Turns 1 to 3). It is the venue for the Singapore Grand Prix. The track is 5.063 km (3.146 mi) long in a harbourside location similar in style to the Circuit de Monaco and the Valencia Street Circuit. 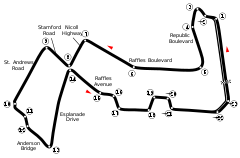 The circuit is designed by KBR, Inc., a modification of the original one first proposed by Hermann Tilke. The circuit has a FIA Grade 1 license. The circuit holds a unique record of having at least one safety car appearance in every race to date. There has been a total of 18 safety car deployments in eleven races.

On the day of confirmation of the Singapore Grand Prix in the 2008 Formula One season, a routemap was published. The pit area of the circuit is located in an empty plot of land off Republic Boulevard and beside the Singapore Flyer. A temporary track leads from the pit area and under the Benjamin Sheares Bridge to Republic Boulevard and turns onto Raffles Boulevard. It then proceeds along Nicoll Highway, Stamford Road and Saint Andrew’s Road around the Padang, past the City Hall.

The track then goes onto the Anderson Bridge, past the Fullerton Hotel and make a tight left turn to Esplanade Drive beside the Merlion Park. It joins Raffles Avenue and cut right after the Esplanade to the front of The Float at Marina Bay and return to the pit area via another temporary road around the Singapore Flyer. The track layout is unique in that in between turns 18 and 19, the cars race underneath a section of grandstand of the Floating Platform.

The track was widely criticised by F1 drivers to be excessively bumpy, particularly on Raffles Boulevard between turns 5 and 7, resulting in a very unforgiving circuit, especially given the hot and humid conditions of the Singapore climate. 2008 World Champion Lewis Hamilton commented that it was twice as hard to negotiate than the more famous Monaco street circuit, and unexpectedly physical – requiring double the amount of energy over a single lap as compared to the Monaco circuit.

Don’t convert or change this track without my permission.