Twin Ring Motegi is a motorsport race track located at Motegi, Tochigi Prefecture, Japan. Its name comes from the facility having two race tracks: a 2.493-kilometer (1.549 mi) oval and a 4.8-kilometer (2.98 mi) road course. It was built in 1997 by Honda, as part of the company’s effort to bring the IndyCar Series to Japan, helping to increase their knowledge of American open-wheel racing. 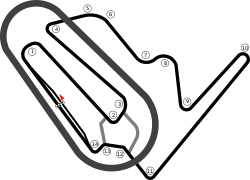 The road course is 4.8 kilometers long and is unique in sharing garage and grandstand facilities with the oval course, but being entirely separate otherwise. Although they are separate tracks, it is impossible for races to occur simultaneously on the two courses; to access the oval track, teams must cross the road course pit and front straight. The road course also runs in the opposite direction from the oval; clockwise, rather than counter-clockwise.

The course itself is built in a stop-start straight-hairpin style, which flows differently than many similarly-sized tracks. By Japanese standards the circuit is exceptionally flat, with only a slight elevation rise towards the hairpin turn. The road course is much busier than the oval track, with Formula Nippon visiting twice, Super GT and Super Taikyu cars once each, and local events almost every weekend. The road course can be used in three ways: the full course, or two “short courses” can be made, using connecting roadways. These short courses are usually used for junior formula events, such as Formula 4 and FJ1600.