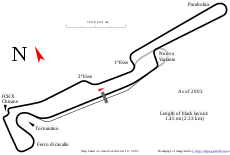 The track is named after Formula One driver Riccardo Paletti, who was killed at the 1982 Canadian Grand Prix.

– 2011 Layout with new ‘Tornantino’ design and wider main straight (left +3m) areas
– Rally Circuit Series PS5 layout
Starting point is near the pit entry, When exiting paddock, the main gate will be open, take left and follow the pit lane.
The real event will be: Start, do 4 full laps, then enter pits. Clocks are ok in SP, not in MP, they crash GTR2.
Removed a lot of 3D using alpha channel for transparency for 3D solid structures.

2010 Layout with new Ickx corner and wider runoff areas (Ickx and Ferro di Cavallo corners)
A lot of improvements in details, expecially in the track entrance/parking zone.
12cm concrete kerbs in some corners, cutting is a bit difficult now.
Fictional Gimkana layout, good for test the handling in tight corners (i recommend to use handbrake and
road/rally cars)

Maybe can be heavy on FPS with max settings on some machines, we fucused on detail.

– Extract the zip content into your GTR2\Gamedata\Locations\ folder
– Remove any previous Varano.hat file in \GTR2\Userdata\Logs\HAT folder, if exist

ANY KIND OF CONVERSION OR PUBLIC USE OF MATERIAL INSIDE VARANO TRACK, IS STRICTLY PROHIBITED.