Skip to content
You are here
Brands Hatch Early for GTR2 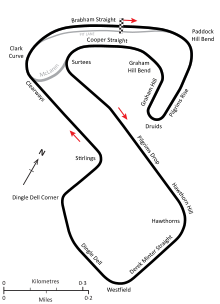 This is a recreation of Brands in its golden years up to about 1975, no particular year is implied. More of a taste of how it was, no chicanes and no tarmac at Paddock Hill band, just grass, you and the barrier. I have changed most of the textures, repaired many flashing/duplicate faces, created and added period logos, team trucks, buildings, pits, score tower, bridge at Kidney bend etc.

This is another of the tracks that was meant to be released along with the CSGT mod, but never made it.I worked on it for a long time, but it has been sitting around so, i released it for Rfactor and now a further enhanced version for GTR2.

Thanks must go to Motorfx for his critique and help, and the new aiw.