Skip to content
You are here
Fiorano Circuit for GTR2

The Fiorano Circuit is a private racetrack owned by Ferrari for development and testing purposes. It is located in Fiorano Modenese, near the Italian town of Maranello. The circuit has FIA Grade 1 license. 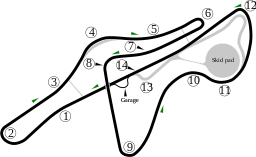 This is a beta version. Some bugs are still included. Sorry.
Because in Fiorano no real pit-area exists, here there is temporary in the Infield.
The pit stops do not work exactly.
The aiw-file must be still improved.

This track was converted and advanced for and from different gmotor2 platforms by, at least, tantra and TICTOC.

One Thought to “Fiorano Circuit v1.1”