Skip to content
You are here
Fuji Speedway WEC for GTR2

I want to thank Katsuo for making this wonderful track and given my permission for the conversion to GTR2 and to publish this track on the internet.

Fuji Speedway is a motorsport race track standing in the foothills of Mount Fuji, in Oyama, Suntō District, Shizuoka Prefecture, Japan. It was built in the early 1960s. In the 1980s, Fuji Speedway was used for the FIA World Sportscar Championship and national racing. Originally managed by Mitsubishi Estate Co., Fuji Speedway was acquired by Toyota Motor Corporation in 2000. The circuit hosted the Formula One Japanese Grand Prix in 2007, after an absence of 30 years, replacing the Suzuka Circuit, owned by Honda. After Fuji Speedway hosted the 2008 race, the Japanese Grand Prix returned to Suzuka for the 2009-onward races. The Super GT Fuji 500 km race is held at the racetrack on Golden Week. 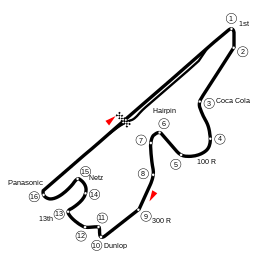 Fuji Speedway has one of the longest straights in motorsport tracks, at 1.475 km (0.917 mi) in length. The circuit has FIA Grade 1 license.

what have been done :

Great Track for big fields as Passing works very well on Fuji.
The Track is wide, has tricky corners and a very long straight.
Perfect for Multiclass Racing.

extract the .rar file with WinRAR or similar unpacker and drop the track-folder into your GTR2\GameData\Locations\…directory – done.