Converted from Assetto Corsa by BillBro

Original Assetto Corsa track made from scratch by Nothke

The Hanoi Circuit or Hanoi Street Circuit was a motor racing venue located in the Nam Từ Liêm district of Hanoi, the capital of Vietnam. It was a street circuit designed to host the Vietnamese Grand Prix, a planned round of the Formula One World Championship. 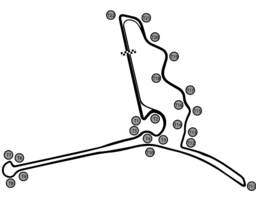 Pictures I’ve been able to find of the actual track have these areas as either green or just asphalt. In the main folder for the track, there are a few loose textures with names beginning with runoff_color. One is asphalt, one is blue, one is red and one is green.

The green one is defaulted at the moment. If you want to change the texture, delete the runoff_color texture and rename the one with the color of your choice to replace it, and these areas will be the color you selected.

The AI are quite fast. However, as you learn the track, you will get closer to them.

They will run away from you on the straightaways if you don’t get off of the last corner leading onto it just right, carrying lots of speed. You can make up some time at the hairpin corners if you are very aggressive on the brakes. Carry as much speed as you can in all of the corners.

extract the .rar file with WinRAR or similar unpacker and drop the track-folder into your GTR2-GameData-Locations…directory – done.

Hope you like the result, and enjoy the track.