Skip to content
You are here
Nordschleife 24h Raceking for GTR2 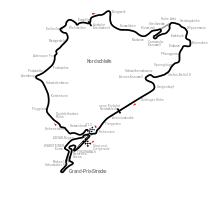 Between 1982 and 1983 the start/finish area was demolished to create a new GP-Strecke, and this is used for all major and international racing events. However, the shortened Nordschleife is still in use for racing, testing and public access.

note : this is another, very good version of the legendary 24h Nordschleife in Germany – not worser than that one from DutchDevil – the asphalt textures/colors looks a little more “older/used” like some other textures so i would say it looks overall more realistic/natural – great work !

This is how it works : Exit the garage, drive around the GP circuit, but after the last chicane, instead of turning left to the actual Nordschleife, follow the GP circuit back to the start/finish lane, where the clock should start running.

If you wish a lower resolution track-textures pack for even faster framerates, copy/paste the “OLDNUERBURGMAPS.GTR” file from inside the folder “LOWER RES VERSION” (included in this package) to the “…\GTR2\GAMEDATA\LOCATIONS\OLDNUERBURG” folder and overwrite files when prompted.

I think that Raceking’s version is perhaps the best Nordschleife for GTR2 yet as far as “looks” go (…track layout is another story…), the biggest problem was the framerates, which were unconstant and terribly low in the modern GP circuit part, especially in the pits area or start/finish area.

…I know that many of you suffer from the same problem with this track, I thought it’s about time something like this is done and shared, so here goes…

What I did in this .TRK file was to leave out a couple of the 3D models of buldings right at the end of the track (just before pit area) and disable the shadows (I don’t think you’ll miss them compared to the original file).

…just try it and this time enjoy the driving with no worries about framerates (hopefully!)…

PS: Please note that this track will still take a lot of time to load (be patient), also AI strenght is still very weak, so nothing fixed in these parts, just better framerates.

PS2: All credits go for Raceking & Gringosan (for the original RFactor track) and FBI for the GTR2 conversion.
….thank you for this wonderfull track! *THUMBS UP*

– Taken grid & pit down to 36 cars (1 car per track garage space, 3 cars per pit)
– Working pits (ai cars should pit ok)
– Fixed ai slow down over start/finish
– Removed most of the rFactor ai that GTR2 doesn’t require. (only left multipath for the formation lap)

There are still a number of small issues with the ai racing line.

THIS AIW WILL CAUSE ONLINE MISMATCHES, UNLESS THE SERVER IS ALSO RUNNING THIS AIW FILE.

just put the folder “OldNuerburg” folder into your GTR2\Locations directory

if you get problems with frames use the file from the included folder “LOWER RES VERSION” and overwrite it in the trackfolder.