Skip to content
You are here
Pembrey for GTR2

Pembrey Circuit is a motor racing circuit near Pembrey village, Carmarthenshire, Wales. It is the home of Welsh motorsport, providing racing for cars, motorcycles, karts and trucks. The circuit’s facilities have also been used for a single venue rally. 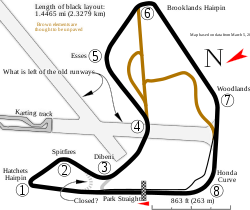 The stimulus for the creation of a racing circuit at Pembrey was the closure of the motor racing facility at Llandow near Cardiff. Port Talbot Motor Cycle Racing Club were the first organisation to put on racing events at this circuit. In 1981 the Welsh Race Drivers’ Association (WRDA) was formed with the expressed intention of developing a new race circuit in Wales. At the same time the former RAF airfield at Pembrey, which had been used as a chicken farm, was acquired by Llanelli Borough Council. Following a representation by the WRDA the decision was taken to construct a racing circuit at the venue. The first race meeting was held on 21 May 1989, and the winner of the first race at the circuit was Nigel Petch in an MGB.

In 1990 the BARC signed a 50-year lease to operate the circuit on behalf of Carmarthenshire County Council.

The circuit has hosted the British Touring Car Championship twice, in 1992 and 1993 at which time the championship was the most popular motorsport series in the UK outside Formula One. Formula 3 races have also been run at Pembrey Circuit, and indeed many recent Formula 1 drivers including Jenson Button raced at Pembrey in their early F3 days. Pembrey twice hosted the European Rallycross Championship in 1997 and 1998. Top-level Superbike racing has also been hosted at Pembrey, in 1990 and 1994.

Special thanks to Mc Wolf and Khan1670 for their fixes and banger for his help.

First delete older Versions of pembrey and also the pembrey.hat file.
Copy the included pembrey Folder to your GTR2\GameData\Locations directory.