Skip to content
You are here
Poznan 2011 for GTR2

Tor Poznan – a car and motorcycle racetrack located in Poznań, Poland, on the border of the Ławica estate (former Jeżyce district) and Przeźmierowa. 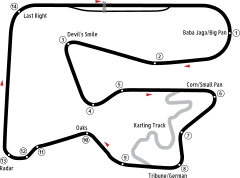 Poznań is the largest circuit in Poland and something of a hidden gem. Reasonably fast and with good run off areas, it is somewhat reminiscent of the Brno circuit in the Czech Republic, albeit with less elevation change.

The circuit was created between 1975 and ’77 after a decision was taken to convert land at the edge of the Ławica airport (one of Poland’s oldest airfields) for racing use. The move was prompted by the Automobile Club of Wielkopolska and the FSR ‘Polmo’ company – manufacturers of Tarpon cars, vans and off-road vehicles – which had a nearby factory. Mieczyslaw Bilinski was tasked with coming up with the design and received advice from Bernie Ecclestone, among others.

I used as template several videos and photos of the FIA CEZ WSMP WPP Endurance race in Tor Poznan (held from 27 to 05/29/2011). I modified the buildings stands and tents, removed the advertising models and flags from Simbin and placed the ads and banners found on the videos, added night lightning, adjusted the surroundings and all the objects so that they receive the night lights, added the Google Map of Poznan and some more objects…

Thanks to Rico83s who changed the AIW to 36 cars and fixed the cameras.