Skip to content
You are here
Rostock Osthafenkurs for GTR2

Track created for GTL and GTR2 by Andre F1-Edition

In April 1952 at the Rostock Osthafenkurs held its first race of the East German road championship for motorcycles and Formula II and Formula III racing. In the period from 1952-1954 saw 100,000 visitors each year exciting races that also West German drivers took part. 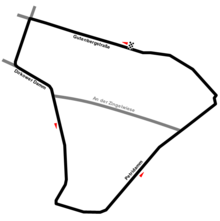 Now the route : You start on the road Gutenbergstraße in the village Dierkow above Rostock and drives to the “Kurve der Jugend”. After the left turn going downhill over the “Kurve der Werften” through the forest to the city of Rostock. There follows a tight left turn, with the name “Matthias-Berger-Kurve”. After the passage of the suburb of Rostock, the route continues through the forest looking up again over several hills and it follows the “Kurve des Friedens”. Then the ride continues after Dierkow where we reach the start/finish of this track.

Construction workers of the track for GTR2 :

Objects and/or textures from Andre F1-Edition, Virtua_LM team, CY-33, Thomas Lächele, Philcout and TheSky, MotorFX and Com8. I’d like to thank all the others I have not listed now, but have stood by me with help and advice.

How could it be otherwise, even here is a problem.
At night some clipping on the track with the front headlights.

The field was limited to 36 cars, which is for the start field the maximum.

Please unpack the ZIP file into the GTR2 target directory or rather copy.

I’d developed the race track for GT Legends and I expanded visually and technically for GTR2. The download is only permitted on the websites of altbierbude.de and nogripracing.com, should be the path where to download differently, notify me. Please Ask whenever changes are made.

CONVERSIONS TO OTHER PLATFORMS AND DRIVING GAMES ARE NOT PERMITTED WITHOUT PRIOR AGREEMENT!