Skip to content
You are here
Sachsenring 1967 for GTR2

Many thanks for the permission to convert this awesome historical track to GTL/GTR2.

The complete mech has been reworked and remapped. Some models and the pit area has been made from scratch. Many new selfmade textures with spec and bump maps added. This conversion takes nearby 3 month of my free time, but this track is worth every hour I have spend.

– Andre Streu for the GPL Track
– Ron Zurnetz for the GPL to ISI raw Conversion
– Greybrad for the AIW
– Luigi for the Cams
– Mc_Wolf for the Marshals
– derDumeklemmer for the Startlights, fps improving and the GTL Version
– Andreas Binz for adding mor Visgroup Entrys
– FrankyBB for the GTR2 LODs
– All the guys, which are trying the Beta Versions

The Sachsenring  motorsport racing circuit is located in Hohenstein-Ernstthal near Chemnitz in Saxony, Germany. Among other events, it features the annual German motorcycle Grand Prix of the FIM Grand Prix motorcycle racing world championship. 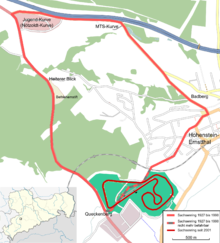 have a lot of fun with this nice historical track,
GTI-Heizer