Skip to content
You are here
Sachsenring GP 1999 for GTR2

The Sachsenring motorsport racing circuit is located in Hohenstein-Ernstthal near Chemnitz in Saxony, Germany. Among other events, it features the annual German motorcycle Grand Prix of the FIM Grand Prix motorcycle racing world championship.

In 1990, with faster Western machinery now available, racing through the village became too dangerous with some fatalities (this can be compared with the Isle of Man TT). 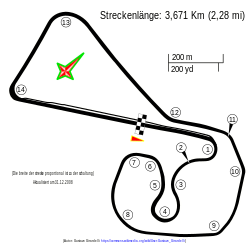 To accelerate redevelopment of eastern Germany in the new unified Germany, a 2.9 km (1.8 mi) short track berg corner was built in the 1990s to bring international motorsport to the newly freed eastern part of Germany. In 1996, IDM motorcycle racing and the ADAC Super Tourenwagen Cup resumed racing here. The DTM raced here in 2000, with Klaus Ludwig winning at age 51, but the DTM did not return after 2002, preferring international venues.

Since 1998, the German motorcycle Grand Prix moved to the Sachsenring from Nürburgring. In recent years, the track has been made faster and longer again, with the length now being 3670m. Since 2007, the Sachsenring is part of the regular schedule of ADAC GT Masters. In 2011 the FIA GT1 World Championship held one of its race weekends at the Sachsenring.

here is another version of your conversion i have taken it further this time. I have corrected bias settings, spec power, specular colour etc. and have changed these to rFactor standards. I have reset object Normals to their correct settings. The F1/C settings have all been changed, also replaced the X sectors to match the newer AIW. I have redrawn most of the textures and saved as DDS, with multitexturing where required. I have added new models and removed others in keeping with the track of 99.Shadows have been implemented where needed. The Jumbotrons now show a movie.

The skyboxi and sky have also been changed along with a rewrite of the GDB and SCN file, the lighting has also been modified. The track is still slow to load and slows at about 80%. I think this is an AIW error as this is an F1/C aiw. The AIW has been tweeked a little in the editor. I have added a new rfactor type loading screen…and lots more that i have forgotten.

quick conversion to GTR2 as requested :