– Carrera.4 for his fantastic rF version

The Suzuka International Racing Course is a motorsport race track located in Ino, Suzuka City, Mie Prefecture, Japan and operated by Mobilityland Corporation, a subsidiary of Honda Motor Co, Ltd. It has a capacity of 155,000.

Soichiro Honda decided to develop a new permanent circuit in Mie prefecture in the late 1950s. Designed as a Honda test track in 1962 by Dutchman John “Hans” Hugenholtz, Suzuka is one of few circuits in the world to have a “figure eight” layout, with the 1.2 km back straight passing over the front section by means of an overpass. 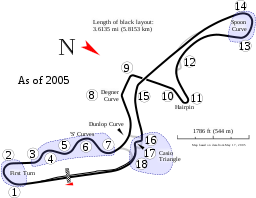 Suzuka, openly touted by F1 drivers and fans as one of the most enjoyed, is also one of the oldest remaining tracks of the Formula One World Championship, and so has a long history of races as venue of the Japanese Grand Prix since 1987. Its traditional role as one of the last Grands Prix of the season means numerous world championships have been decided at the track.

Suzuka was dropped from the Formula One calendar for the 2007 and 2008 seasons in favour of the Toyota-owned Fuji Speedway, after the latter underwent a transformation and redesign by circuit designer Hermann Tilke. Suzuka and Fuji were to alternate hosting the Japanese Grand Prix from 2009. However, after Fuji announced in July 2009 that it would no longer be part of the F1 calendar, Suzuka signed a deal to host the Japanese Grand Prix in 2009, 2010 and 2011.

The circuit closed for a year in order for the renovation to make it F1-compliant for 2009, with the last major event held on November 18, 2007, although some annual events (for instance, the Suzuka 8 Hours and Suzuka 1000km) were still held. The track held a re-opening day on April 12, 2009.

Suzuka also hosts other motorsport events including the Suzuka 1000 km endurance race. Previously a part of multiple GT racing series including the now defunct group C class of the All Japan Sports Prototype Championship, the Suzuka 1000 km as of 2006 is now a points round of the Super GT Series, and is the only race of such length in that series. In 2010, the GT500 pole position time was 1:55.237. In 2007, the GT300 pole position time was 2:06.838.

Suzuka 1988 was build from the scratch for rFactor by Carrera.4 who kindly gave me his permisson to convert all his current and upcomming tracks. A very BIG “Thank you so much” for this kind offer!

Pls. notice the original rF-Release Notes in this archive.

We’re offering the result of all our working hours to all of you free of charge but we ask for one single fee from your side: Pls. give a little respect to all these working hours all of us spend for free for your entertainment! This project is a “take it as it is, or leave it”-release, pls. see EULA for more detailed information.

– DutchDevil for getting me started in conversion issues
– MotorfX and Greybrad for their kind AIW guidance
– My lovely wife for all her patience and understanding.