Skip to content
You are here
Viedma for GTR2

Autódromo Viedma is a motorsports circuit located in Viedma, Argentina. 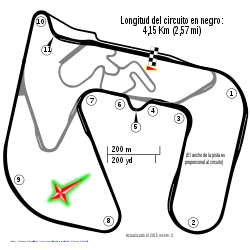 It has hosted events in the TC2000 series. The circuit has two types of paths, which allow on it the organization of
competitions at national, prominent among them are the Wagon Tourism, Super TC2000 and Turismo Nacional.

At the same time the circuit has become an important additional space, taking into account the existence of
Speedway Park City General Roca in Upper Black River Valley.

extract with WinRAR or else and drop the track-folder into your
GTR2\GameData\Locations\…directory – done.

– only for private, non-commercial use / entertainment
– use at your own risk
– this track may only be hosted on http://trackaholics.forumotion.com and esport-racing.de