Skip to content
You are here
Albert Park 2011 for GTR2

The Albert Park Circuit is a motorsport street circuit around Albert Park Lake, three kilometres south of central Melbourne. It is used annually as a racetrack for the Formula One Australian Grand Prix, Supercars Championship Melbourne 400 and associated support races. The circuit has an FIA Grade 1 licence. Although the entire track consists of normally public roads, each sector includes medium to high speed characteristics more commonly associated with dedicated racetracks facilitated by grass and gravel run-off safety zones that are reconstructed annually. 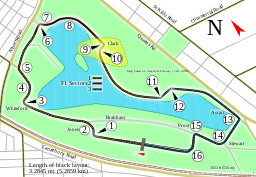 However the circuit also has characteristics of a street circuit’s enclosed nature due to concrete barriers annually built along the Lakeside Drive curve, in particular, where run-off is not available due to the proximity of the lake shore.