Skip to content
You are here
DTM 2018 Mod for GTR2

The 2018 Deutsche Tourenwagen Masters was the thirty-second season of premier German touring car championship and also nineteenth season under the moniker of Deutsche Tourenwagen Masters since the series’ resumption in 2000. 2018 would be the final season for the traditional 4.0-litre V8 naturally-aspirated engine package that debuted in the inaugural reborn season; as the brand new engine package has been introduced for the following season as part of the “Class One Project” prospect with Japanese Super GT GT500 cars. 2018 also marked the final season for Mercedes-Benz in DTM due to Mercedes-Benz departing to FIA Formula E from the 2019–20 season and thus ended its 19 year participation. 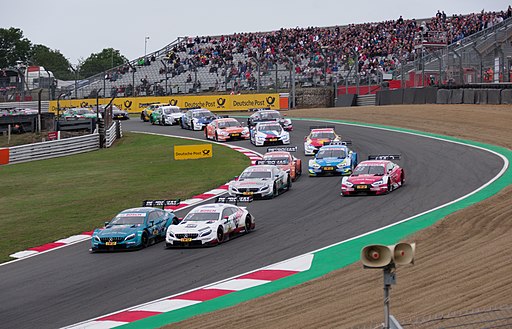 Gary Paffett won his second title at the final round of the season with a third place finish, beating previous champion René Rast by four points despite a late charge to six consecutive wins by Rast, a new series record. Paffett became the second non-German driver to have won more than one DTM driver title, and thus repeating Swedish driver Mattias Ekström’s feat in 2004 and 2007 seasons.

Mercedes-Benz won the manufacturer’s championship for the first time since 2010.

this is a heavily revised version of the DTM 2018 Conversion by Sidstalker from TrackaHolics. I spent about 10 days to improve this nice mod / cars – hope you like it 😉

updates on all modes :

…and a lot more that I can’t remember…

I don’t use shader packs, as my game looks still good with full game and nvidia graphic-card settings with high anti-aliasing. Shader packs require more hardware resources and worsen the frames in the game. The models are partly high poly with high-resolution textures, especially the Audi RS5 – that’s why i prefer a smooth gameplay than high-resolution vehicles, which in total drop the frames the more vehicles are visible on the screen.

i recommend always to DELETE FIRST any previous versions of this car / mod to prevent crashes / mismatches !

for that, navigate into your “GTR2-GameData-Teams…” directory and delete the complete folder “DTM_2018” – done.

to install, extract with WinRAR or else and drop the GameData folder into your GTR2 main-directory – allow to overwrite existing one with “YES ALL” – done.

No original GTR2 files will be overwritten.