Skip to content
You are here
Nürburgring 2001 for GTR2

This is the version of the well known GP track, before they added the Mercedes arena after the first corner. The Castrol-S used to have a lot of incidents, the most famous was Ralf and Michael Schumacher taking each other out in 1997. 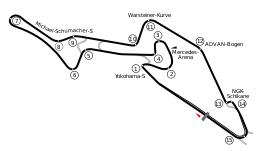 The new track was completed in 1984 and named GP-Strecke (German: Großer Preis-Strecke: literally, “Grand Prix Course”). It was built to meet the highest safety standards. However, it was considered in character a mere shadow of its older sibling. Some fans, who had to sit much farther away from the track, called it Eifelring, Ersatzring, Grünering or similar nicknames, believing it did not deserve to be called Nürburgring. Like many circuits of the time, it offered few overtaking opportunities.

This track was taken from F1 2001 Challenge, made by ISI for Electronic Arts.
I have done the conversion myself.
It took me a long time to figure out how to convert the textures…

– time trial is not fixed yet.
– the track could use some better camera’s