Skip to content
You are here
Sepang International for GTR2

The Sepang International Circuit (Malay: Litar Antarabangsa Sepang) is a motorsport race track in Sepang, Selangor, Malaysia. It is located approximately 45 km (28 mi) south of Kuala Lumpur, and close to Kuala Lumpur International Airport. It hosted the Formula One Malaysian Grand Prix between 1999 and 2017, and is also the venue for the Malaysian Motorcycle Grand Prix, the Malaysia Merdeka Endurance Race and other major motorsport events.

The main circuit, normally raced in a clockwise direction, is 5.543 kilometres (3.444 mi) long, and is noted for its sweeping corners and wide straights. The layout is quite unusual, with a very long back straight (927 metres) separated from the pit straight by just one very tight hairpin. 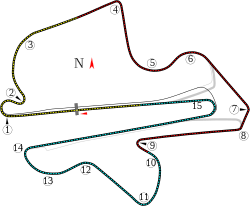 Other configurations of the Sepang circuit can also be used. The north circuit is also raced in a clockwise direction. It is basically the first half of the main circuit. The course turns back towards the pit straight after turn 6 and is 2.71 kilometres long in total.

On 23 October 2011, on the second lap of the MotoGP Shell Advance Malaysian Grand Prix, the Italian motorcycle racer Marco Simoncelli died following a crash in turn 11 on Lap 2, resulting in an abandonment of the race.

In October 2016 it was mooted that the Sepang circuit may be dropped from the Formula One series due to dwindling ticket sales, and held its nineteenth and last World Championship Grand Prix in 2017.

in this version is a file included named “Sepang.texture.update.rar” (added and arranged by SiGi, April 2019).

these are the GMT files if you wish to use the fantastic rFactor Sepang-GP4 track update by 6e660 in GTL.

The original update for rFactor can be found here

Originaly released for rFactor, this updates many textures for that high quality look and feel.

1) make first sure that you have installed the track “Sepang v1.1” by DutchDevil. check if you have a folder called “Sepang” in your GTR2 Locations directory.

2) if that’s the case, copy all included .dds and .gmt files from the “Sepang GP4 update by 6e66o” folder and paste them into the main Sepang track folder.

3. then copy all .gmt files from the folder “Sepang GP4 update for GTR2 by RMi” and paste them into the Sepang folder – allow to overwrite all existing files with “YES ALL” – done.

6e660 for original textures and GMT update
m.wood for conversion to GTL

we thank 6e66o for allowing us to release the converted GMT files.

Just extract this rar to your GameData\Locations folder.